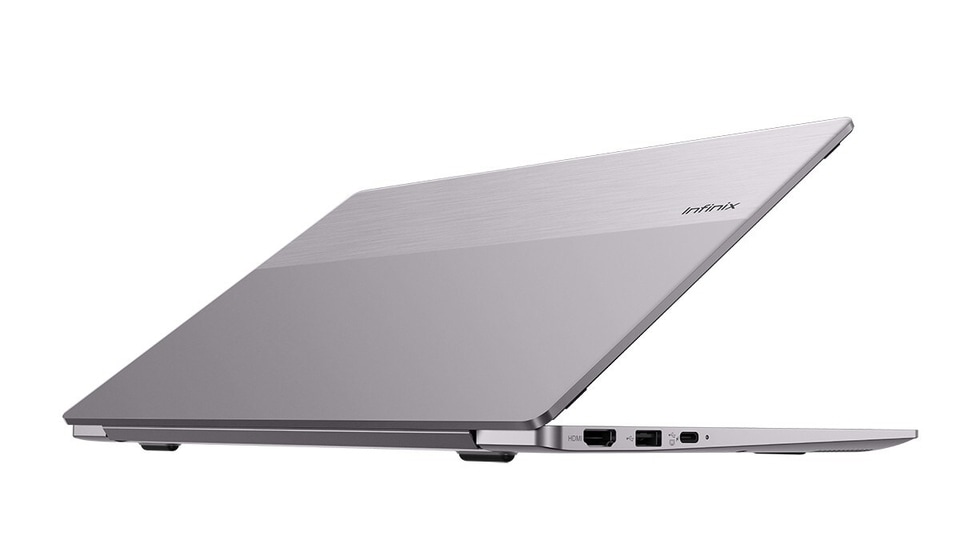 This laptop is available on Flipkart and has been launched in four colours – the neutral Starfall Grey and the more striking Noble Red, Cosmic Blue, and Aurora Green. 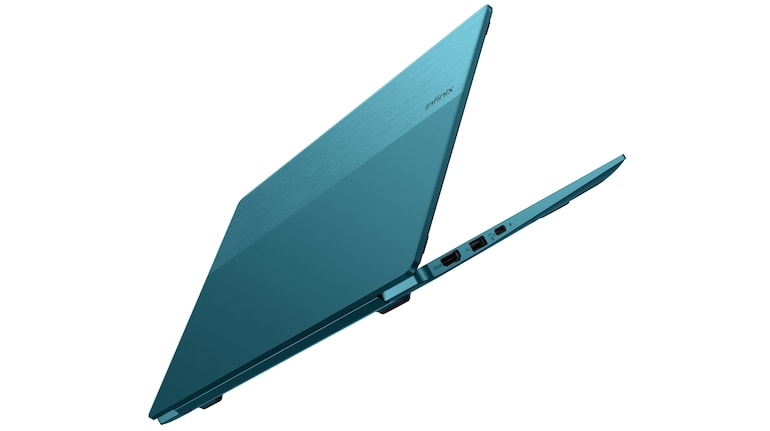 Although this is a basic budget laptop, Infinix has managed to give it some design flair. The lid and bottom are made of aluminium. Just like the InBook X1, the upper third of the lid has a shiny brushed texture while the rest looks sandblasted and matte. There’s a small, subtle Infinix logo to one side.

My blue unit has a fairly dark interior and wasn’t distracting at all to work with. The lower half is predominantly plastic, and so is the frame around the screen, but nothing feels cheap. The hinge is relatively reassuring, and the screen doesn’t warp even if the lid is flexed deliberately. Keyboard flex is also minimal, but the trackpad is a bit plasticky and the mechanism is stiff and loud. Don’t expect a very slick, modern look with ultra-thin borders, but you won’t have any major complaints about build quality, for a laptop at this price.

Weighing 1.24kg and measuring 14.8mm thick, the InBook X1 Slim lives up to its name. It’s portable enough for students and office workers to carry around every day. You get a relatively small 65W USB Type-C charger in the box, which is handy. One unique feature that Infinix is boasting about is the “dual star” LED flashlight – two LEDs flanking the webcam above the screen. You can toggle them with the Win+Space keyboard combo, and we’ll see what this does for webcam quality later in this review. Just be cautious, as depending on the angle of the screen they can shine directly in your eyes.

The power button looks like it could have an integrated fingerprint sensor but this is sadly not the case. You get a conventional keyboard layout with nothing out of place. The arrow cluster is a bit compressed but it’s nice to have dedicated paging keys in a column on the right. I wasn’t expecting a backlit keys at this price, but it’s a great feature to have and you can choose between two levels of brightness. The trackpad is fairly large but is centred to the laptop’s body rather than the standard typing position and I noticed that palm rejection isn’t as good as I’m used to with other laptops. You get stereo speakers on the bottom, firing sideways. 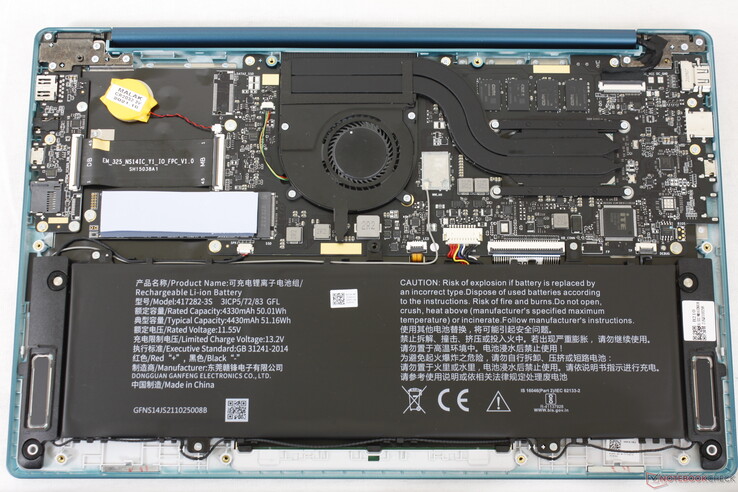 Being a budget laptop, some compromises are to be expected. What’s interesting is that Infinix has gone with Intel’s 10th Gen ‘Ice Lake’ CPUs for all variants – these are now nearly three years old and while they’re still good enough to get work done, you might feel a bit constrained after a few years of use.

My review unit has a Core i5-1035G1 CPU, which has four cores and a 15W nominal TDP rating. It runs at between 1GHz and 3.6GHz, but the ‘G1′ designation indicates that the integrated Intel UHD graphics capabilities are relatively weak.

The 14-inch display has a full-HD 1920×1080 resolution and a non-reflective surface, which is great for work. Infinix claims 300nits peak brightness and 100 percent sRGB colour gamut coverage. The InBook X1 Slim uses LPDDR4X RAM which means it’s soldered and not upgradeable. The company also says it has used PCIe 3.0 SSDs across the lineup.

You get a 50Wh battery which Infinix says is good for “all day” battery life, defined as 11 hours of Web browsing or 9 hours of video playback. Infinix also promises a full charge in 90 minutes, which we will soon test.

The InBook X1 Slim ships with Windows 11 Home and no preloaded third-party software. Thankfully, it was possible to get started without needing to link a Microsoft account. I did see at least one popup ad from Microsoft and shortcuts to Microsoft Store downloads in the Start menu.

Despite worries about its slightly dated processor, the InBook X1 Slim performed quite well in day-to-day tasks. It’s responsive in regular use, even with several browser tabs open, and that’s really what reflects today’s common use cases. You’ll be able to communicate, work with productivity apps, stream video, and even play some light games. The keyboard is comfortable enough to type on for long stretches but the trackpad does get in the way sometimes and you’d be better off tapping than trying to click it.

The 14-inch screen is not very bright or vibrant but you’ll only really notice this when watching videos. It’s fine for working with text and most ordinary use cases. Infinix boasts of a quad-speaker sound system with DTS Audio enhancement, but I found sound quality to be quite weak. Music was hollow and thin but voices were easy to follow.

Heavy tests will show that you can’t expect great performance in serious content creation work or modern games with this laptop. It put up scores of 3,621 and 2,847 in PCMark 10’s standard and extended runs, while Cinebench R20’s single-core and multi-core scores were 393 and 1,171 respectively. These numbers are okay for a laptop at this price level, considering that they’re comparable with what the more expensive Mi Notebook 14 managed at the time of its review in 2020, for reference.

One aspect of the InBook X1 Slim that seemed particularly weak was its SSD. Large sustained file transfers from an external SSD were frustratingly slow, averaging 32MBps. CrystalDiskMark reported sequential reads and writes of 2,377.1MBps and 1,953MBps respectively, and random reads and writes came in at 799.7MBps and 950.4MBps respectively. What’s also interesting is that diagnostics could not identify the manufacturer or model of SSD used – Infinix says it’s an NVMe PCIe 3.0 unit. Transcoding a 1.3GB AVI file into H.265 in Handbrake took 1 minute, 51 seconds. Compressing a 3.24GB folder of assorted files using 7zip took 4 minutes, 25 seconds. 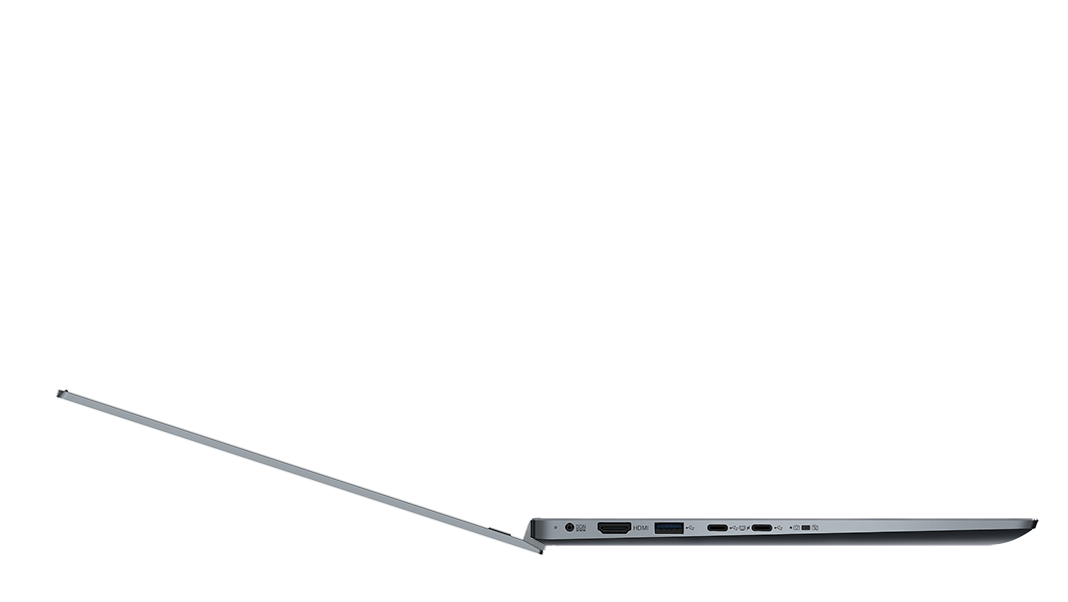 Graphics performance isn’t too bad, if you have reasonable expectations. You can’t run even slightly dated games like Shadow of the Tomb Raider – it managed only 14fps on average at 1280×720, even at the lowest graphics quality preset. 3DMark’s Time Spy and Night Raid scene scores were 547 and 7,186 respectively. However, casual games ran well enough. Bloons TD 6, a simple yet fun tower defense game ran very smoothly, even on battery power.

I was able to use the InBook X1 Slim for casual productivity and Web surfing for 8-9 hours on a single charge. This falls short of the company’s estimate but is still fairly good. The InBook X1 Slim did well in the intense Battery Eater Pro test, running for 2 hours, 54 minutes. Using the LED webcam flash and doing anything graphics-heavy will of course drain the battery quicker. Starting from a dead battery, it took 30 minutes to get to 45 percent and the battery level was at 78 percent after one hour of charging. USB Type-C charging is convenient but only works with the port on the left.

Of course you’re probably wondering whether the LED flash is just a gimmick. To begin with, the webcam is really not all that great, producing dull, fuzzy images. The LEDs did help a little, especially when my face was partially in shadow, but there was no dramatic improvement in quality. If you need to look professional on video calls, you’ll want not only a proper ring light but also a proper USB webcam.

You’ll be able to hear the InBook X1 Slim’s cooling fan when the laptop is stressed, and I could also perceive it at times when running ordinary tasks. The left of the keyboard did get slightly warm when playing games.

Inflation is unavoidable these days and every rupee saved can matter. Infinix has managed to cover all the basics that the average home user, student or professional could need. The InBook X1 Slim is relatively affordable and the usage experience is not compromised in terms of build quality, missing features, or weak performance. It doesn’t go above or beyond the basics and it might not be as versatile as you’d like a few years down the line, but cost is a huge factor for buyers of laptops in this segment.

The entry-level variant, priced at Rs. 29,990 (before offers) is just about right in terms of meeting the needs of the average user. The RAM is not upgradeable but 8GB should be enough. The middle variant, as reviewed here, is also pretty good value at Rs. 39,990. The top-end variant, priced at Rs. 49,999, will have a more niche audience. If you need some serious number-crunching power and don’t much care about entertainment or looks, it strikes an interesting balance.

I didn’t find the webcam LEDs useful at all, but little touches like the backlit keyboard, fast charging, two USB Type-C ports, and non-reflective screen all made using the InBook X1 Slim quite pleasant. If you need something even less expensive, the company has just launched the very similar InBook X1 Neo for Rs. 24,990, with a weaker Intel Celeron CPU but many of the same features.

We will be happy to hear your thoughts

No comments to show.

How to add Mailchimp email form to post or page